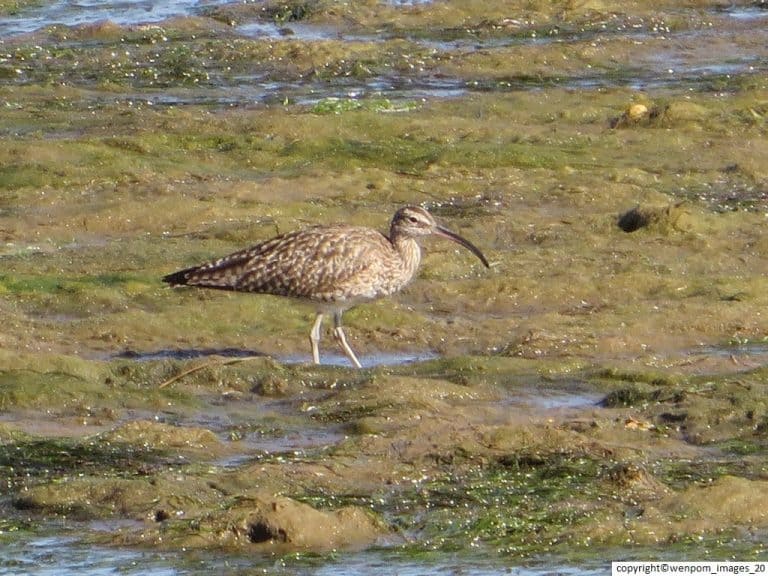 The Eurasian curlew or common curlew (Numenius arquata) is a wader in the large family Scolopacidae. It is one of the most widespread of the curlews, breeding across temperate Europe and Asia. In Europe, this species is often referred to just as the “curlew”, and in Scotland known as the “whaup” in Scots.This is the largest wader in its range, at 50–60 cm (20–24 in) in length, with an 89–106 cm (35–42 in) wingspan and a body weight of 410–1,360 g (0.90–3.00 lb). It is mainly greyish brown, with a white back, greyish-blue legs and a very long curved bill. Males and females look identical, but the bill is longest in the adult female. It is generally not possible to recognize the sex of a single Eurasian curlew, or even several ones, as there is much variation; telling male and female of a mated pair apart is usually possible however.

The familiar call is a loud curloo-oo.

The only similar species over most of the curlew’s range is the Eurasian whimbrel (N. phaeopus). The whimbrel is smaller and has a shorter bill with a kink rather than a smooth curve. Flying curlews may also resemble bar-tailed godwits (Limosa lapponica) in their winter plumages; however, the latter have a smaller body, a slightly upturned beak, and legs that do not reach far beyond their tail tips. The Eurasian curlew’s feet are longer, forming a conspicuous “point.

The curlew exists as a migratory species over most of its range, wintering in Africa, southern Europe and south Asia. Occasionally a vagrant individual reaches places far from its normal range, such as Nova Scotiaand the Marianas. It is present all year in the milder climates of Ireland and the United Kingdom and its adjacent European coasts.

It is generally wary. Highly gregarious outside the breeding season, the Eurasian curlew feeds by probing soft mud for small invertebrates, but will also pick small crabs and earthworms off the surface if the opportunity arises.

The nest is a bare scrape on taiga, meadow, and similar habitats. Each curlew lays between 3 and 6 eggs in April or May and incubates them for about a month until they begin to hatch. It has been observed that curlews tend to nest close to kestrel’s nests, as they can offer protection from other predators, such as corvids, even though kestrels also predate curlew nests .

The curlew is one of the species to which the Agreement on the Conservation of African-Eurasian Migratory Waterbirds (AEWA) applies.

Formerly classified as a species of Least Concern by the IUCN, it was suspected to be rarer than generally assumed. Following the evaluation of its population size, the classification was found to be incorrect, and it was consequently promoted to Near Threatened status in 2008. Though it is a common bird, its numbers are noticeably declining,[9] particularly in the United Kingdom and Ireland, which have about a quarter of the global population. In the twenty years up to 2016, the population is estimated to have declined by more than 50% in England and Scotland, more than 80% in Wales, and more than 90% in Ireland. At the end of 2015 it was placed on the United Kingdom’s red list of most endangered bird species.(From Wikipedia)